I have previously done an article on comparing RENFE Seville-Madrid and VIA Rail Montreal to Toronto. (english link) (french link) No surprise as RENFE was cheaper and faster than VIA Rail.

Ministry of Development José Luis Ábalos, "Renfe is prepared to face the arrival of the competition", but has also requested "reciprocity" in other European countries in view of which "the liberalization of the railroad in this country is becoming the most open and balanced, a whole model. "

This is in relation to the opening up of domestic railways to competition in the passenger rail industry.

Avlo will be Renfe's high-speed service with the highest passenger capacity, with 438 seats per train, 20% more seats compared to the current 112 series trains. Subsequently, as the new service is extended , the new trains of the 106 series will be incorporated, with an even greater capacity, of 581 seats per train. 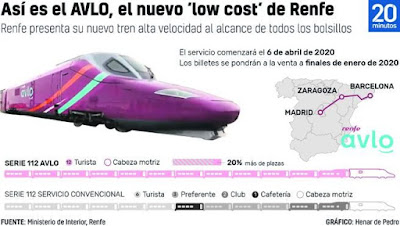 Email ThisBlogThis!Share to TwitterShare to FacebookShare to Pinterest
Labels: AVLO, Renfe, VIA Rail