High Speed Rail in Spain - Opens Up to Competition 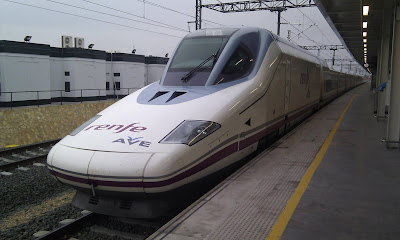 Guest post by Phillps - The 14th of December, 2020 was a historic day for Spain. 3 high speed corridors (Madrid-Barcelona; Madrid-Seville/Málaga; and Madrid-Alicante/Valencia) were opened for competition, bringing an end to state-owned Renfe’s monopoly. 3 operators won each one one of the three service packages that were offered. On this post I’ll cover all the information known to date about each operator, the rolling stock they’ll use, ticket prices and the services they’ll offer. 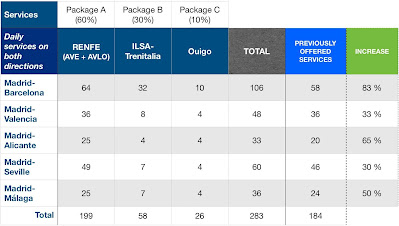 State-owned Renfe won Package A, covering 60% of the services offered.

Renfe’s services will be served with AVE and AVLO:

AVE is the high speed service Renfe has been offering since the introduction of the first line back in 1992. It’s a regular 3-class service that uses 4 different rolling stocks.

Prices range depending on the line, with the highest prices on the Madrid-Barcelona line (between 60€ and 150€) and considerably lower on other lines. 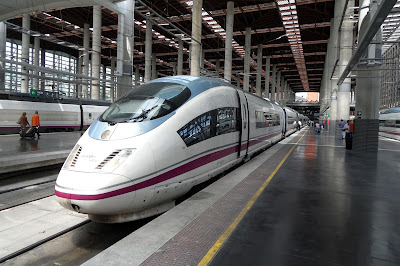 AVLO is the brand new low-cost offer Renfe designed to counter the liberalization. At the moment it’s only announced to run between Madrid and all the way up to the French border, with stops on all stations including Zaragoza and Barcelona. The first service will depart the 23rd of June this year.

Initial price offers started at 5€, with regular prices ranging from 10€ to 60€, and the average being between 25€ and 35€. They will run 5 daily frequencies on each direction.

They’ll use modified S112 train sets with a single class and no cafeteria coach: 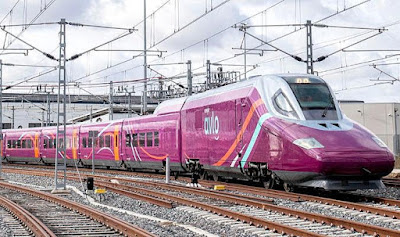 ILSA-Trenitalia is the first private railway company in Spain. It’s a consortium formed by airline Air Nostrum and Italian railway operator Trenitalia. They won Package B, with 30% of the services. They are set to begin service sometime in 2022. Some key points to make:

- In an interview to magazine ‘Trenvista’, the CEO said they were looking to take their passengers to their destination “from start to end”, meaning that apart from the rail service, they would offer integrated tickets with pre-booked extra transport services, including airplanes (probably using Air Nostrum’s fleet).

- They plan to have international services to destinations in Portugal, France and Italy in the future. 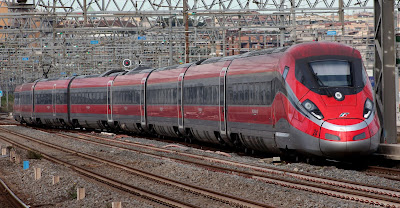 Exact frequencies are not yet known. Prices are yet not known neither.

Ouigo is the low-cost operator that French state-owned SNCF launched in 2013. It has been a huge success and carried more than 13 million people in 2019. Now they are expanding to Spain, with refurbished in Oui trains. Unlike the French version, though, this one maintains the cafeteria coach and has 2 classes. The first service will depart the 10th of May.

The cost of a ticket ranges between 9€ and 55€, with the average being around 19€-25€. Tickets are currently only being sold for the Madrid-Barcelona line.

They used refurbished double-decker Euroduplex trains, which previously served the Barcelona-Paris route as an in Oui service:

WHY NOT IN CANADA? WE DESERVE BETTER!

El Periódico de Aragón - as had exclusive access to the interior of the refurbished Euroduplex trains that the low-cost operator France's  OUIGO will use to begin service the 10th of May on the Madrid-Barcelona high speed line.

The refurbishment has been, apparently, quite superficial. OUIGO sells its tickets at an average of 9€-29€. For comparison, a regular high speed ticket before could cost between 40€ and 120€ on the same route. The train will cover 621km/385miles in 2h 30min on the fastest services and 2h 52min on the one stopping at all 4 stops along the route.

Ouigo, which will compete with the recently announced AVLO low-cost operator, will expand to other corridors in 2021-2022, as will AVLO. 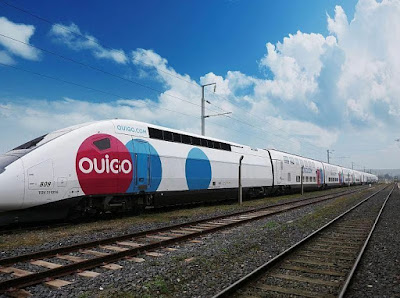 Siemens latest high speed trains the VELARO NOVO will travel up to 360km/h. There is currently a test car operating in Germany.

Trains have rarely been as variable as the Velaro Novo. “Variable train” covers all the innovations that make each Velaro Novo unique, for operators and passengers alike. This includes maximizing the available space by 10 percent, and its high-speed range of 280km/h - 360 km/h.

The Velaro Novo’s lightweight body shell is based on the empty tube concept, meaning that there are no permanent installations inside the car and the interior can be furnished according to customer wishes and altered whenever requirements change. The cars have no underseat containers or electrical cabinets in their interior, and their length was enlarged to 28.75 m. Passengers can enjoy the maximum available space.

The Velaro Novo is about 15 percent lighter than previous Velaro generations. We were able to reduce the train’s weight by more than 70 tons.

The Velaro Novo has inbound bogies. With their inbound bearings, the running and traction bogies ensure smoother running, less wear and tear, and better protection from snow, ice and gravel.

“Proven technology” means tried and tested innovation and years of experience: More than 1,000 Velaro trains in use around the world have covered more than 3 billion kilometers at speeds of up to 380 km/h. Since April 2018, all the innovations in the Velaro Novo have been tested using the #seeitnovo test car. During a two-year period, it will travel a total of 100,000 kilometers.

Wouldn’t it be nice if Canada had high speed trains. We deserve better. http://highspeedrail.ca

Promotional material for this article from Simens.

Washington, Oregon, and British Columbia are studying how ultra-high-speed ground transportation (UHSGT) might serve as a catalyst to transform the Pacific Northwest. The Cascadia UHSGT system will connect the metro areas of Vancouver, BC; Seattle, WA; Portland, OR, and points between and beyond, with frequent service running at speeds as high as 250 miles per hour (400 kilometers per hour)

To view this study and all Vancouver Seattle-Portland click HERE. 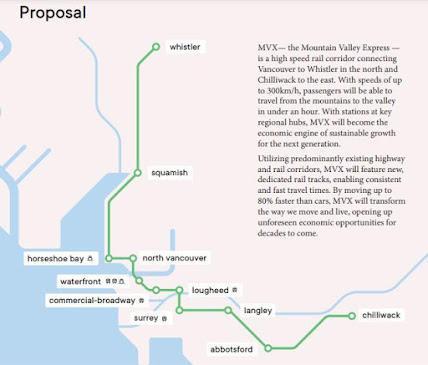 Exciting news out of the British Columbia. There is a proposal titled," Mountain Valley Express" (MVX). It proposes a high speed rail line between Whistler-Vancouver-Chilliwack.

According to their website - With speeds of up to 300km/h, passengers will be able to travel from the mountains to the valley in under an hour. With stations at key regional hubs, the MVX will become the economic engine of sustainable growth for the next generation. With travel times up to 4 times faster than driving, MVX will transform the way we move and live, opening up unforeseen economic opportunities for decades to come.

Feel free to learn more about this important proposal at https://www.mvx.vision/index.html

In 2002, Paul Langan the founder of High Speed Rail Canada, began his search for all audio and video materials of Canada's  famous Turbotrain. In 2009 he posted the TURBO movie in 3 parts on Youtube. Now for the first time  the complete movie has been loaded for the public to view.

The film is a look at Canada's fastest train. On April 22nd, 1976 the Turbotrain set the Canadian Railway Speed Record travelling 140mph/225km/hr while operating as a Passenger Extra 153 East between miles 104 and 84 on CN's Kingston Subdivision.

The train was built by United Aircraft Corporation for CN Railway and ran in Canada from 1968 and 1982. They were built by Montreal Locomotive Works. The Turbo also ran in the USA.

Film Description from the 1971 CN Film Catalogue - CN's turbine-powered train which covered the 336 miles (540km) from Montreal to Toronto in just four hours. The film follows the development of the Turbo - from its engineering, to its construction and interior design. Ride Turbo to the heat of downtown Montreal and Toronto and savour a gourmet dinner at your Turboclub seat. Everything about Turbo is new - from the dome lounges to the pant suited hostesses.

1970 - 23min.45s - Produced by Peterson Productions, Sponsored by Canadian National Railway. TURBO was awarded a bronze medal at the International Film and Television Festival of New York. Permission to use the TURBO film for educational purposes was granted to Paul Langan by CN in 2002.