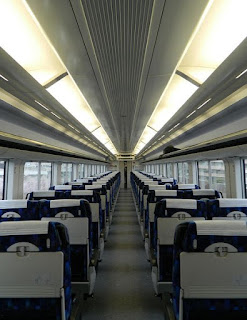 Ontario is moving forward with its much-needed project to halve journey times across Southwestern Ontario by bringing 250 km/h High Speed Rail to London and Windsor. However, the government has published a timetable suggesting that the earliest dates for implementation could be 2025 and 2031 respectively. This timetable appears to have more than doubled since the original announcement in London just before the 2014 election.

Ontario needs to work to a more ambitious timetable that delivers meaningful improvements in travel times much sooner, and for more communities.

While 2031 doesn’t sound quite as futuristic as it once did, a few things will have happened by then. There will have been two full economic cycles and four elections, any one of which could derail the project. Fifteen more cohorts of students will have passed through our universities. Computers will be more than fifty times faster than today. Many countries will have ended or be close to ending gasoline car sales, and self-driving technology will be commonplace.

More practically, the entire VIA Rail passenger fleet that Southwestern Ontario services depend upon today simply isn’t going to last that long. The trains that bring today’s students and researchers to study artificial intelligence at Waterloo or the inner workings of the human brain at Western are already as much as 70 years old, and there are only so many miracles that can be worked to keep legacy equipment fit for daily 160 km/h service. Safety always comes first, so if equipment wears out before replacements arrive then services will be cut.

If the objective of the project is to support the emerging innovation corridor in our region, action is already well overdue and what’s needed is an agile, incremental approach that delivers results at every step. This also happens to be the approach that’s worked for other rail networks around the world, and it costs less overall because farebox revenues flow sooner.

Step one would be for Ontario to sit down with the federal government and green light the passenger rail fleet replacement that is already being studied by the federal Liberals. By ordering a modern fleet of 250 km/h trains that meets the future needs of the whole corridor from Quebec City to Windsor, we’ll avoid the long-term maintenance cost problems that plague small fleets; be ready to use each upgraded or new section of track as it is ready; end the lawsuits over the shortage of wheelchair spaces on obsolete equipment; and overcome the equipment shortage that is holding back VIA Rail’s previously promised service expansion in our region. If an order is placed soon, the first of the new trains could be on the rails by 2020.


Step two would be to make the best of the existing infrastructure, acknowledging that a new high-speed alignment between London and Kitchener will take a while to build. The Toronto-Kitchener-London route can already support six daily services thanks to previous investment in signalling and passing sidings that are currently underutilized, so services could be reinstated in months, not years. Combined with services via Woodstock, an hourly service to London is within reach. The route between London and Chatham that is included in the Ontario HSR plan could also be restored to double track within a year, with all grade crossings fully protected. This would eliminate delays, allow more frequent services, improve safety, and reduce travel times by as much as thirty minutes.

Step three would be to ensure tight integration with London’s Bus Rapid Transit and other regional rail and transit services from the outset, so that passengers can transfer easily and quickly. It costs a lot less to shave fifteen minutes off end-to-end travel time by designing better stations and coordinating service connections than by increasing top speed, and for the project to serve the interests of the whole region, connecting buses and regional rail services must be treated as integral parts of the project.

With these simple steps, many of the benefits of the Ontario HSR project could be delivered as much as ten years sooner, without duplicating work or adding to the overall cost, while improving the chances of getting the full project delivered on schedule.