Is there any solution for the current passenger rail crisis in Canada? 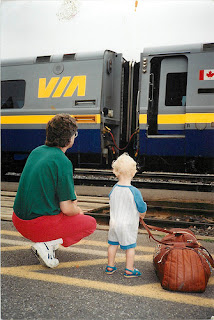 Without any legislation to support their existence, VIA Rail seemed doomed from the start. Then came the disastrous decision to privatize our national railroad  CN Rail in 1995. There were no safeguards in place to protect VIA Rail our passenger rail service provider.  CN wasted no time in ensuring VIA was treated poorly: running second fiddle to freight operations.

It did not matter if it was the Liberals or the Tories in power federally. Each party has made draconian cuts to VIA's funding.

VIA Rail has done little to help its cause over the years with ridiculous high pricing and an arrogant management style that has made them unaccountable and out of touch with the public. The auditor general report identified deficiencies in VIA's project management systems and practices.

Today the status in Canada of our national passenger rail company VIA Rail must be considered as critically endangered. They need over $1 billion dollars to update their aging fleet. Their flagship train The Canadian has become a punching bag for CN with on time performance around 25% and delays between 10 and 24 hours do occur.

In desperation, VIA Rail's lawyer turned CEO Yves Desjardins-Siciliano has resorted to a $4 billion plan to run slow trains along a half a century old abandoned passenger rail corridor. Small communities like Sharbot Lake have been told by VIA Rail they will get passenger rail service returned. Other communities like Pontypool, Perth and Tweed are fighting for a stop along the route.

Poor treatment by CN of VIA trains running on CN tracks has been a serious problem for VIA but this extreme move to the former Ontario-Quebec Railway line has a myriad of its own problems.

Canadians dreaming of modern high speed passenger trains have been continually disappointed for the last 50 years as over 22 studies have been done in Ontario alone with no action taken by any government.

In Alberta 4 studies have sat on the shelf that has prevented Edmonton and Calgary being connected by high speed rail. In BC, they are undertaking their 1st study ($1 million) of the Vancouver- Seattle high speed train potential.

The Liberal government in Ontario has shown their commitment to high speed trains running between London-Kitchener-Toronto. This route was suggested in the 1995 study as the preferred route to Toronto. The proposal is now being studied in depth.

On a positive note the concept of the 3Ps, Public, Private Partnerships are under serious consideration for funding/building and operating the London-Toronto HSR proposal.

The provincial opposition Conservative party has not stated their support for the project. Their leader Patrick Brown and the party seems unable to articulate any plan for passenger rail in Ontario.

So the bitter reality is that more than 40 years after its creation, VIA Rail has the same fundamental problems today as it did then. Will the Trudeau government do what no other government has done before?

The federal Liberal government must:

1. Pass an Act of Parliament with legislation that clearly outlines what VIA Rail's mandate is.
2. Develop Regulations under the Act that:


3. Pursue a 3Ps performance based approach to resolve the significant infrastructure issues relating to modernizing Canada's rail infrastructure to have high speed trains travelling over 250km/h on dedicated track.
4. Give VIA Rail immediate funding for purchasing new passenger rail cars and appoint a competent person to oversee this project to ensure VIA Rail makes the best decisions that will benefit Canadian taxpayers.

Let us be cautiously optimistic for the renewal of passenger rail in Canada in 2018.