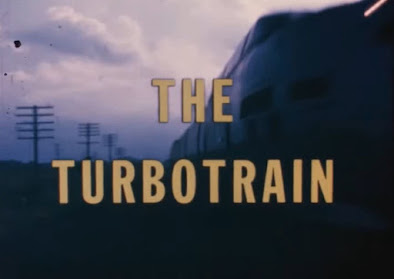 High Speed Rail Canada has added another film of the legendary CN UAC TurboTrain to their Youtube Channel.

Released originally by the Surface Transportation Systems of Sikorsky Aircraft Division of United Aircraft in 1968. It includes excellent footage of the TurboTrain demonstration runs.

From the original Sikorsky Aircraft promo material released with the film: "A sleek, new lightweight passenger train, the Turbo-Train, enters service in 1968 in the United States and Canada.

The TurboTrain is lighter, faster, quieter, smoother and more reliable than conventional trains -and cheaper to run. The TurboTrain, conceived on aerodynamic principles, and powered by aircraft-type gas turbine engines, was designed by United Aircraft Corporation.

It is being developed and marketed by Surface Transportation Systems, Sikorsky Aircraft Division. The TurboTrain is a modern, streamlined, high-speed intercity passenger train designed by aerospace engineers and based on the principles of flight.

Powered by aircraft-type gas turbine engines, it was designed to provide comfortable, high performance service on existing railroad trackage. The TurboTrain can travel at speeds up to 170 mph but initial top speeds in passenger-carrying service this year will be about 120 mph. "

This film is being posted for educational purposes only. To view The TurboTrain, click HERE.

For more information on the TurboTrain with the High Speed Rail Canada TurboTrain Page.

July 09, 2021
Fantastic news out of Alberta! The companies EllisDon and AECOM are proposing a high speed rail line between Calgary, Red Deer and Edmonton. Here is their press release. We will be watching this closely. Edmonton, AB, July 8, 2021 — EllisDon, a world-leading construction services and infrastructure development company, announced today that they have formed a partnership to advance the development of high-speed rail connecting Edmonton, Red Deer, and Calgary in Alberta, Canada. EllisDon and its team took the initiative to propose the project within the Government of Alberta’s Unsolicited Proposal Guidelines and Framework. "The notion of high-speed rail — a proven technology around the world — connecting Edmonton, Red Deer, and Calgary in Alberta is not new, but we believe that its time has come. We have built a team with both the capacity and faith in the future of our province to advance it in a meaningful way for Albertans," said Jeffrey Hansen-Carlson, Director with EllisDo
Post a Comment
Read more