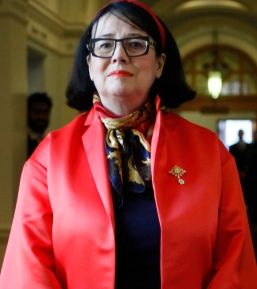 The Honourable Janet Austin, OBC,Lieutenant Governor at the Opening of the Fifth Session, Forty-first Parliament of the Province of British Columbia. The throne speech 02/11/2020 outlined priorities for the government.

Good news for people believing in high speed rail between Vancouver and Seattle/Portland. Here is a quote from the speech.

"British Columbians can look forward to more options like rapid transit, HOV lanes and commuter rail out to the Fraser Valley, and high-speed rail connections with our neighbours to the south."

July 09, 2021
Fantastic news out of Alberta! The companies EllisDon and AECOM are proposing a high speed rail line between Calgary, Red Deer and Edmonton. Here is their press release. We will be watching this closely. Edmonton, AB, July 8, 2021 — EllisDon, a world-leading construction services and infrastructure development company, announced today that they have formed a partnership to advance the development of high-speed rail connecting Edmonton, Red Deer, and Calgary in Alberta, Canada. EllisDon and its team took the initiative to propose the project within the Government of Alberta’s Unsolicited Proposal Guidelines and Framework. "The notion of high-speed rail — a proven technology around the world — connecting Edmonton, Red Deer, and Calgary in Alberta is not new, but we believe that its time has come. We have built a team with both the capacity and faith in the future of our province to advance it in a meaningful way for Albertans," said Jeffrey Hansen-Carlson, Director with EllisDo
Post a Comment
Read more